General was launched in 1866, but you could say the story began four years earlier. The snus manufacturer Johan A Boman wanted to produce the “perfect snus” and his research took four years. He traveled all over the world in his quest to find the best tobacco leaves, and began experimenting with different blends. The final result was a blend of 22 different tobacco varieties, mixed with one drop of bergamot oil.

General’s tobacco blend with notes of tea, hay and leather, creates a snus with an underlying spiced tobacco flavor. A drop of bergamot oil, a citrus fruit that mainly grows in Italy and northern Africa, gives General its signature flavor. According to Boman’s instructions, only the finest parts of the tobacco plant are used, the stalk is avoided, and the tobacco is left to dry naturally in the sun.

Still today, only a few people know about Boman’s original recipe from 1866. We have developed new products with a deep respect for this legacy, and a wide range of General products are available in both Sweden and other countries. One interpretation is G.3 – a stronger snus in a slimmer pouch, designed to offer less drip and fit perfectly under the lip. If you prefer an explicit whisky-flavored snus, why not try General Mackmyra - flavored with Mackmyra’s Swedish malt whisky “Svensk Ek”.

In 1866, JA Boman's Generalsnus saw the light of day. It was a success that lasted for over 150 years. But who was he really the creator of Generalsnuset, JA Boman? Johan Adolf Boman was born in 1821 in Strömstad and is the son of Beata Barbara and Johannes Boman. The father is a sea captain and died in 1834 in a ship accident. The family is hard hit and at the age of 21 JA Boman moves to Gothenburg.

In 1851 Johan Adolf married the one year older Gustafva Amanda d´Orchimont in Uddevalla. Gustava Amanda comes from a French noble family and was born in Strömstad. At this time, he is already established as a wholesaler in Gothenburg. Together they have the children Axel, Herman and Gustaf. They have four more children who do not survive to adulthood.

1849 Boman becomes a partner in the tobacco company Ferd. Körner, formerly owned by the sales clerk Jacob Ferdinand Körner. His title would then be changed to tobacco manufacturer. Körner & Co was originally an import company that traded in coffee and cotton.

1854 the company changes its name to Körner & Boman. In 1857, the company's office was located at Smedjegatan 5 in Gothenburg, so that on April 1 of the same year, they moved to Östra Hamngatan 14, which already housed the factory.

In 1861, Boman took over the company under its own auspices under the name JA Boman & Co and five years later launched Generalsnus, which would prove to be a very popular and long-lasting snus brand. It is said that Boman was obsessed with creating the best snus market the market had ever seen and experienced. General is becoming a bestseller and immensely popular among 19th century snus consumers.

From the end of the 19th century, the focus was entirely on snus and eventually became Gothenburg's third largest snus factory and now Boman's youngest son Gustaf Boman is also included in the company. In addition to General, the company manufactures other popular snus brands such as Götha Vapen, Ögonsnus, Grofsigt and Patent Rapé.

HOW GENERAL SNUS PORTION IS MANUFACTURED?

Grinding is the first step in GENERAL Snus production. This is done is various ways, depending on which properties we want to bring out in the tobacco. Each ground tobacco blend is stored in a separate silo. Samples from each tobacco blend are taken and sent to our laboratory for analysis.

Preparation begins when the flour blend is ready. The process starts by weighing the ground tobacco blend, which is then transported to blenders. Water and salt are added while the mixture is stirred. Salt is added for taste, but also for its preservative properties. The tobacco is then heated in a process similar to pasteurization in order to neutralize microorganisms, make the snus more long lasting and enhance the aroma and flavor.  Following the heating process, the snus is cooled, after which other ingredients are added. Samples are taken for quality control purposes. If all the measurements are approved, the batch is ready for packaging. The process is a completely closed system and the quality control is rigorous.

If all the measurements are approved, the batch is ready for the third stage – GENERAL Snus packaging. Obviously, portion snus must first be packed in portion pouches while loose snus is filled directly in the can.

Packaging portion snus requires more advanced equipment. The portions are measured and inserted into a cellulose fiber tube – the same type used for tea bags – and then sealed and cut apart. Finished portion pouches are packed in a plastic can and sealed with a lid. After sealing, the cans are weighed and labeled. They are then stacked in rolls that are wrapped in plastic and packed in boxes.

All ready-packaged snus is stored in cold storage for a few days before being shipped out from the factory. Cold storage is important for allowing the snus to mature and acquire its characteristic aroma and flavor.

General Extra Strong Portion, it has the classic General flavor and a full bodied tobacco character. This snus has a full sized pouch that is moist on the surface for a quick and strong flavor release. General Extra Strong is good and traditional snus from Swedish Match.

General White, it has a spicy tobacco taste with notes of bergamot and hints of tea, hay, and leather. This snus has a full sized pouch that is dry on the surface with a moist content for low salivation and a lasting flavor release. General White is good and traditional snus from Swedish Match. 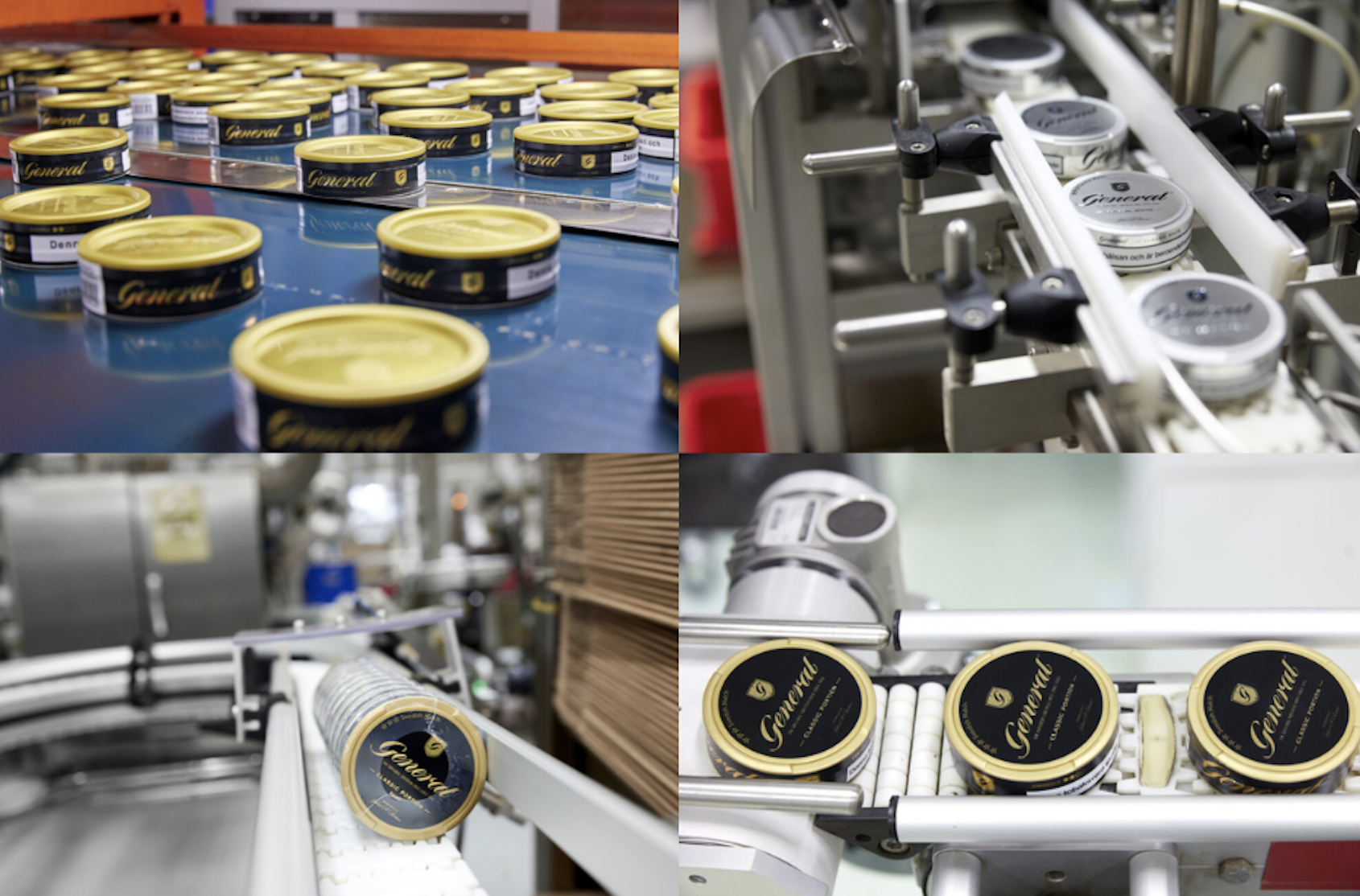 My name is GENERAL Snus, but people call me ...

Shop By
Now Shopping by
Clear All
Shopping Options
Flavour
Price
Strength
Size
Compare Products
Compare
Clear All
You have no items to compare.
Copyright © 2017- 2022, The Royal Snus Online- www.TheRoyalSnus.com. All rights reserved.